Only available in the Integrator user interface.

Changing one of these settings requires a restart of the system. Ongoing calls will be cancelled.

ECO DECT is an environment-friendly technology which reduces the power consumption and enables a variable reduction of transmission power. 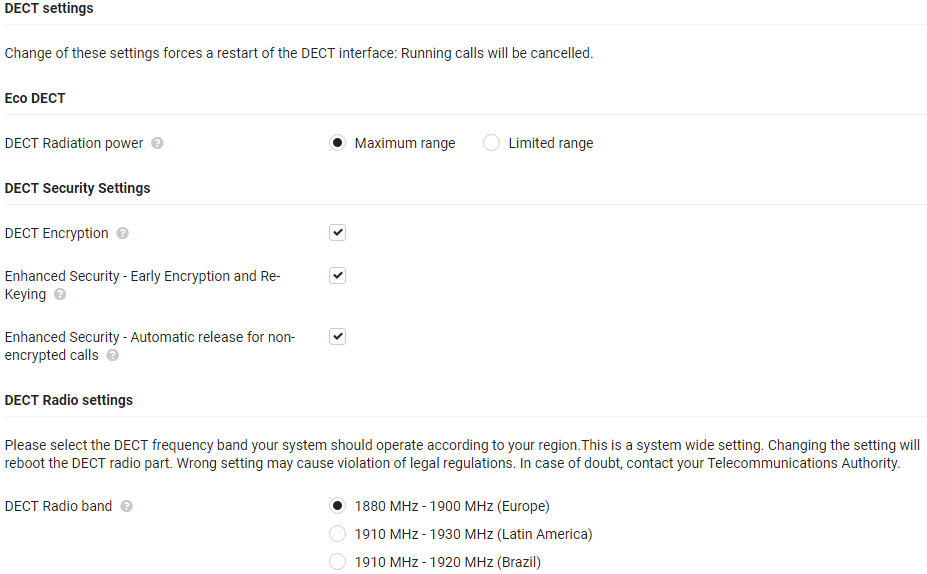 Limited range (50 mW EIRP) : The radiation is reduced by up to 80 %. This will also reduce the range.

DECT radio traffic between base stations and handsets is encrypted by default. The following options allow you to define the security settings in more detail.

Activated: The following messages are encrypted:

The key used for encryption is changed during an ongoing call and thus improving the security of the call.

Deactivated: No CC messages or early data are encrypted.

Activated: If encryption is activated, it will be released in the case that a call is initiated by a device that is not supporting encryption.

Due to different national regulations DECT units are required to use different frequency ranges to make them compatible with DECT systems in other areas. You can adapt the frequency range of the N870 IP PRO Multicell System to the requirements of your region.
DECT Radio band

Please select the DECT frequency band your system should operate according to your region.This is a system wide setting. Changing the setting will reboot the DECT radio part. Wrong setting may cause violation of legal regulations. In case of doubt,
contact your Telecommunications Authority.

Also the DECT handsets will not be able to communicate with the system as these have static setting Europe.