*= use the web-portal of Sipgate basic instead for this feature.

**= Fax2Mail service only available by Sipgate with Sipgate plus rate.

For entering a new SIP trunk into the PBX, you need some steps:

And we choose the last three digits also as extension for the user:

In the Gigaset PBX go to "Administration" - "Routes" - "Gateway groups" enter a name for the new group and click on: Create new group

In the Gateway group you have to define the Outbound Caller ID, the Inbound DIDs (how the number is forwarded to the Inbound routes) and the Inbound caller ID (number presentation of external caller). in addition you can permit here inbound calls in general for this gateway group. 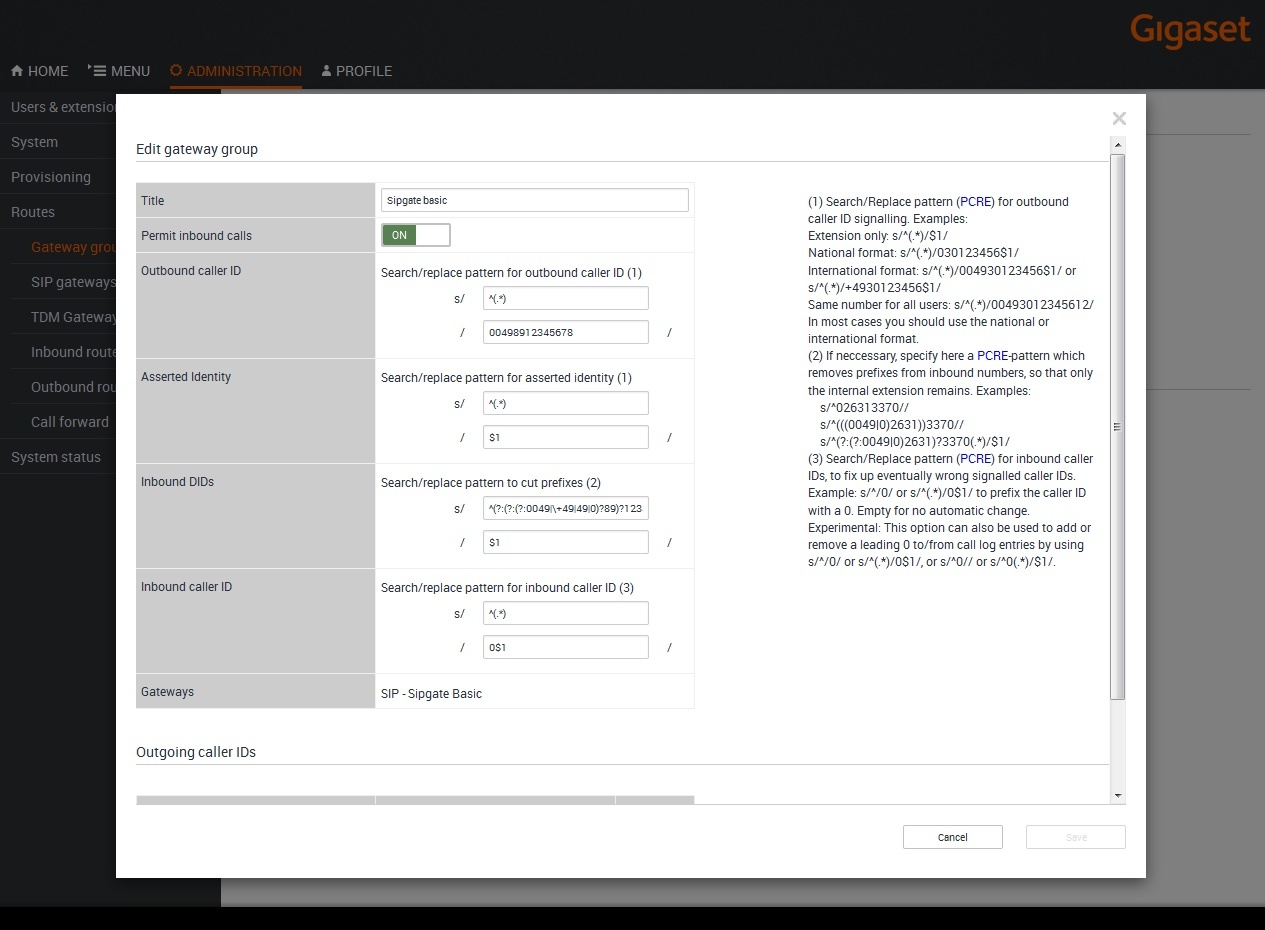 As the number is fixed with this account, every user who is allowed to use this line will present the same number to the callee.

These fields are used specially for external forwardings. Some providers need special settings in order to present the correct number at the receiving party.

!!! For Sipgate basic accounts this setting is not of interest, as you can only modify your CLIP via the Sipgate basic Web-portal. This is valid for standard calls or call forwardings. !!!

For incoming calls, you can use the regular expression, generated by the setup assistant. In your case you would have to adjust the city-code and the first part of the extension, according to your line-settings.

This expression cuts all possibly available country- and city-codes and the pilot-number from the incoming number and only the extension is remaining (here: 678). This will be forwarded to the Inbound Routes.

For incoming calls, we will add an additional 0 in front of the external number of the caller, in order to use the callback-feature of the phone (e.g. 0089987654321). During the call-setup the additional 0 will be automatically removed.

This field will be empty when you create this Gateway group. It will show later the assigned SIP gateways.

In the Gigaset PBX go to "Administration" - "Routes" - "SIP gateways" enter a name for the new gateway and click on: Create new gateway

The SIP gateway contains all necessary data for the registration and dial command and how the number is delivered to/from the provider.

Just enter or choose the values according to your contract or data you received from the provider. 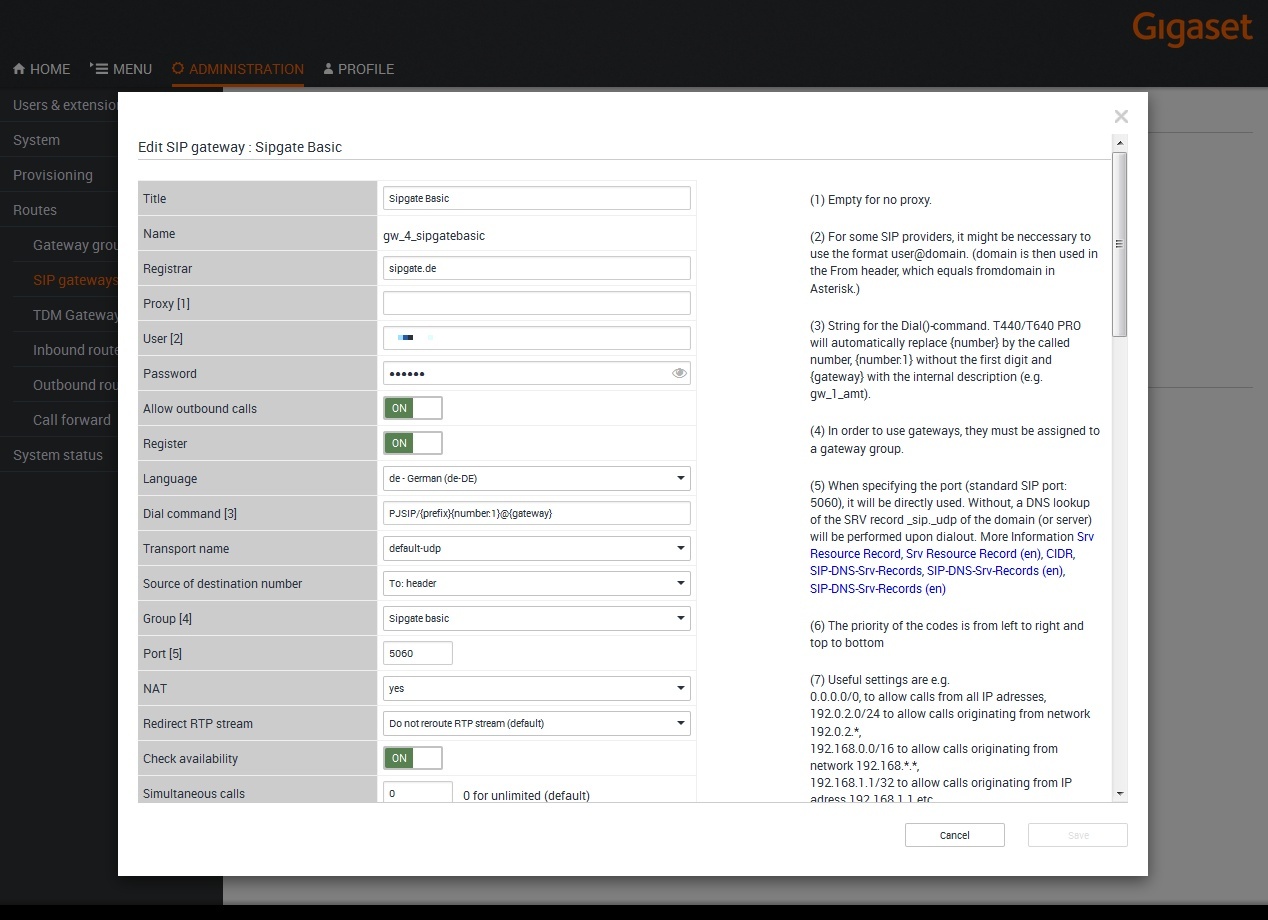 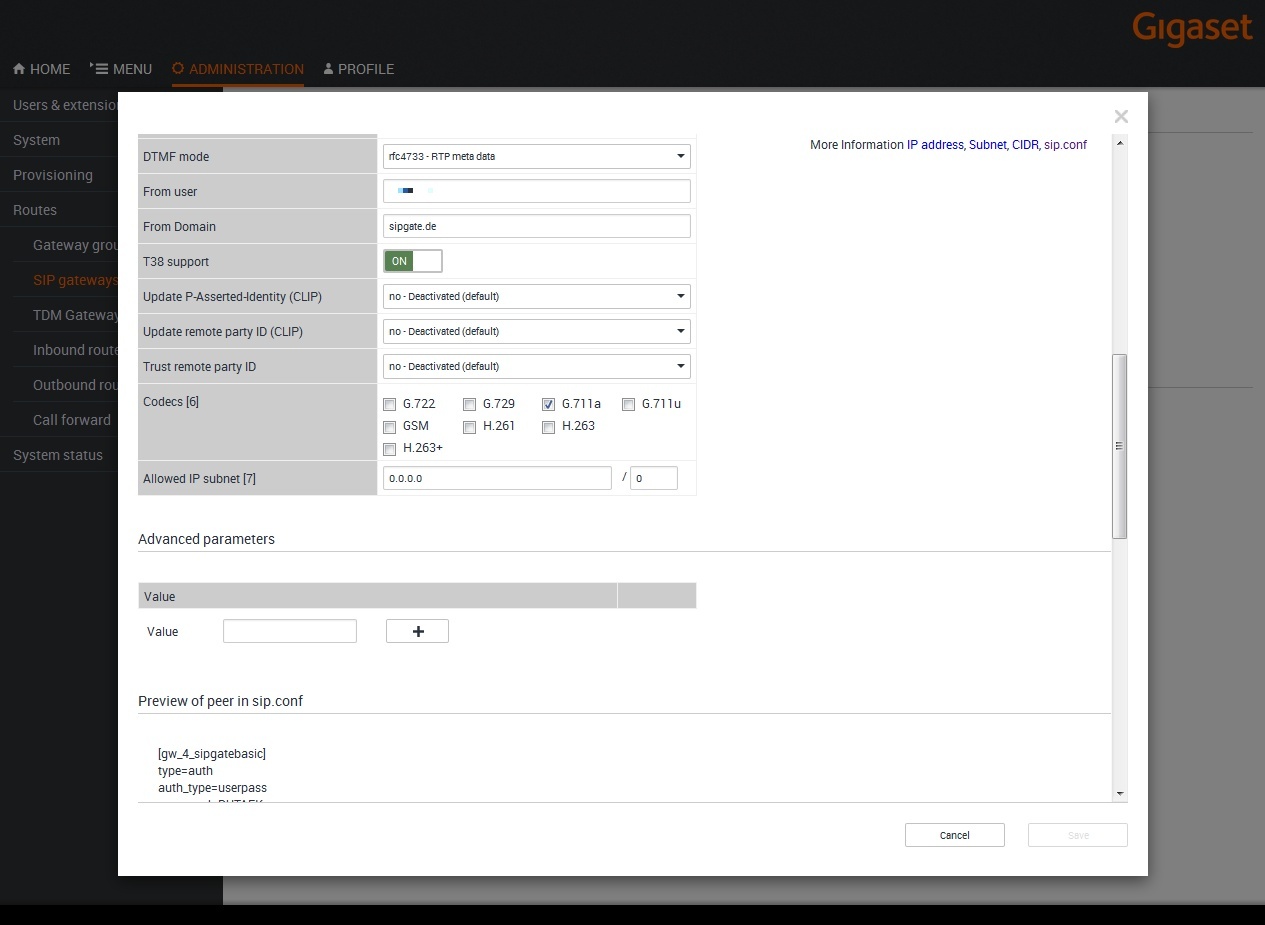 This setting is just optional, as the provider replaces outgoing CLIP which is not valid with the default number of the SIP account.

For sending another CLIP, use the CLIP-No-Screening feature in the Sipgate basic web-portal.

Underneath you will see then a preview of the entry in the sip.conf file.

Sipgate basic also do support G.722 and G.711 ulaw. For wideband calls (IP to IP) activate also the G.722 codec in the SIP-gateway.

In addition it is advised to activate the advanced options by clicking it to 'ON' and then pressing Show.

Enter here a name for the according rule.

With these settings you can configure a time-controlled routing to different targets.

In the pattern you define which part of the incoming number is used to forward the call to the according extension.

Because the Sipgate basic contains only one number, we do a 1:1 match between external and internal number.

The shown example is the easiest way for single numbers, but also other configurations or assignments are possible.

In the Gigaset PBX go to "Administration" - "Routes" - "Outbound routes" activate the Advanced options by clicking it to 'ON' and then pressing Show.

Enter here a name for the according rule.

With these settings you can configure a time-controlled routing.

In the pattern you define how the outside line is seized. In our example all dialled numbers starting with '0' will use the Gateway group Sipgate basic.

If you want to use multiple Sipgate basic accounts in the PBX, you have to create a permission group for each user.

The dedicated permission group has to be assigned to the user in the user-settings and then for the outbound routes you have to select the according group, too!

The default setting for groups ([all]) can't be used in this case.

Fax currently (11.08.2016) has been tested. These results are without a guarantee. Due to different end-devices, configuration of PBX or other settings the fax transmission might fail.