The SCP is used for communication between the N870 DECT Manager and the N870 base station. Numerous mechanisms of the DHCP protocol are reused in this. In this case, the N870 DECT manager acts as an SCP server and the base stations as SCP clients.
Due to the fact that a "common broadcast domain" is needed, SCP cannot be used between different subnets or sites, which are interconnected by means of a VPN. This is due to the protocol being used and the layers:

e.g. VPN (OSI) is layer 3, the broadcast domain, however, is layer 2. Lower layers are not just able to use higher layers. In this instance, each subnet requires its own separate, independent DECT manager.

You must install the DECT base stations in the same subnet due to it must be in the same broadcast domain.

19 Mar 2020 See here about a new development how to install a DECT base in a different subnet.

Overview about the DECT discovery protocol/procedure.

DECT base is connected to Power.

Broadcast message via layer 2 is, send by DECT Base station:

DECT base will start DHCP procedure.

SCP is using Layer 2 and can not communicate with devices in other networks. 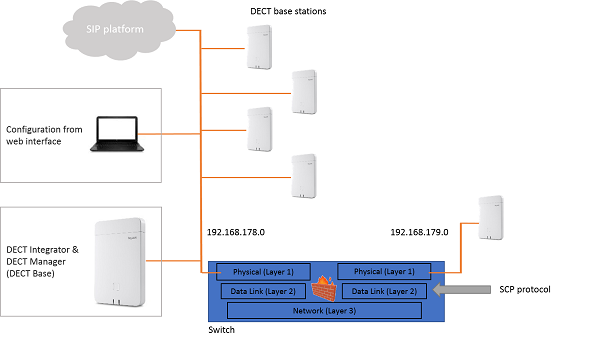